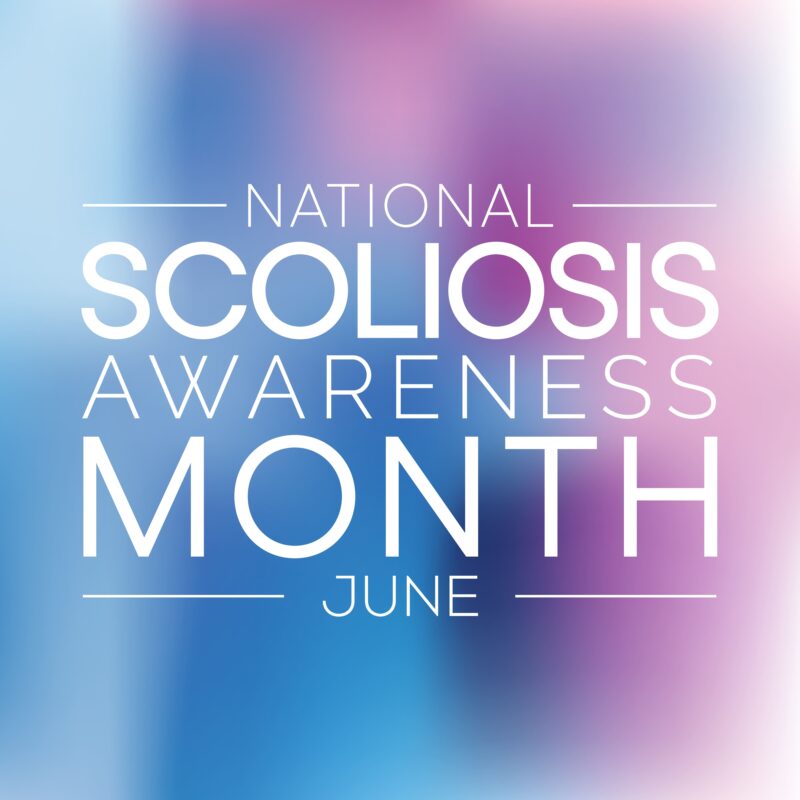 Did you know that June is National Scoliosis Awareness Month? During the month of June, scoliosis patients, families, physicians, clinicians, institutions, and related businesses are united to highlight the need for education, early detection, and public awareness of scoliosis. Currently, it is estimated that anywhere from six to nine million Americans are affected by scoliosis. The majority of these people are children and adolescents, however scoliosis can also be diagnosed with scoliosis.

In a spine affected by scoliosis, however, the spine does not curve outward or inward. Instead, scoliosis causes the spine to curve sideways, causing the spine to resemble an “S” or “C” shape. There are different types of scoliosis, including:

Scoliosis can produce a variety of symptoms, depending on the severity of the curve. In some cases, symptoms are only cosmetic and can include:

When the curve is more severe, scoliosis can produce symptoms such as:

How Scoliosis is Diagnosed and Treated

Scoliosis can be diagnosed by performing a visual examination of the spine. Standing with your arms at your side allows your doctor to see if there are any obvious signs of spinal curvature, such as uneven shoulders or hips. They will also ask you to bend forward so that they can look for curvature in the upper and lower back. In cases where scoliosis is suspected, additional imaging techniques may be used to determine the severity of the curve.

Treatment for scoliosis depends on a number of factors including age, the amount and type of curvature, and the type of scoliosis. In most cases, bracing can be used in cases where the individual is still growing and has a curve of 25-40 degrees. Although bracing won’t correct the curve, it can prevent the curve from becoming more severe. In cases where the spinal curvature exceeds 40 degrees, then spinal fusion surgery is usually recommended to straighten the spine and prevent future curvature.

Let's Get Started
Get More Information
Skip to content